Wanted to share two sauce recipes my kids love. The second for a dumpling sauce is at this page. The first one I got through equation [1] below. (All good scientists have equations numbered in square brackets as I have done below. Rounded brackets are a little weak and less substantive – have a few notes like this in this page just to convince you that all this is authentic stuff. Anything else you see on the internet about pancake sauces is likely a major rip-off)

It is easy to derive [1] once you transform the problem from a Hilbert Space to a Galois Field Metric. My daughter has an elegant proof (proofs should always be elegant) for it, but I will let the reader puzzle through it and just move on to applications. The one that comes to mind is a generous application of the sauce till it drips off the sides of a pancake, hot and fresh, straight off the griddle. Well, before we get there we need the second thing on the RHS – The Indian Sweet Spice Mix (RHS -Right hand side, always good form to identify entities in equations using the LHS and RHS acronyms). But one equation alone is never good enough in a manuscript so lets work our way through it step by step. Before I get to equation [2], let me warn you that like everything deep, profound and theoretical, this is rather counter-intuitive. Here is equation [2].

Yes hot spices – Are you with me? Have you taken it all in? As before we will work inwards from the RHS (acronym again – one must watch the word counts in scientific treatises). I get my hot spices as the set containing the elements below (note a mathematical set does not need to be numbered – but note the nice curly brackets)

As noted earlier a limited random sampling from this set is recommended. I usually do a pinch of cayenne pepper or red pepper flakes and half a pinch of salt, though I will sometimes add one pepper corn, a pinch of cumin seeds or a single clove. You should get ground cayenne pepper at a store or you can use red pepper flakes and grind with the rest of the ingredients as I note later. Pepper corns as you know are little black round things, cumin consists of little brown seeds, and Cloves have a little dark stem with a round pod at the end. Often chewed a clove when I had a toothache as a kid. I refer the reader to Figure 1 below for a conceptual overview. (Good scientists always provide good visualizations which are appropriately labelled). 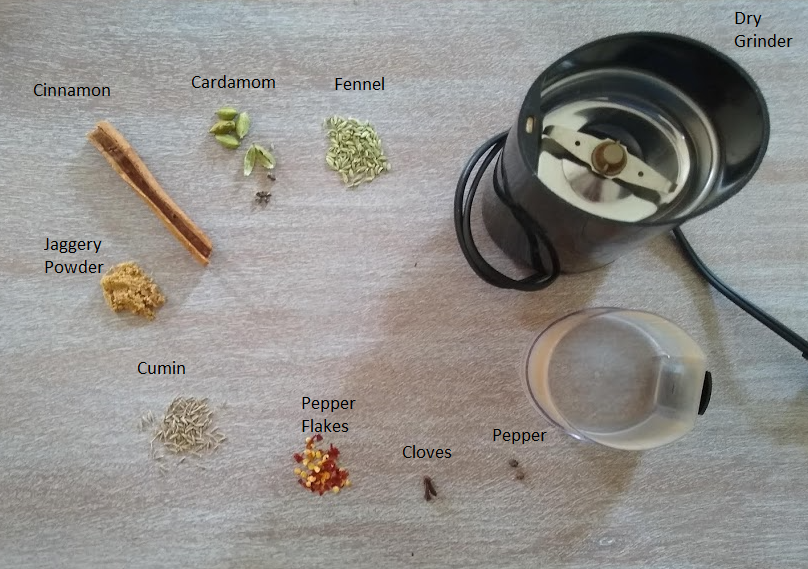 The little sampling surprise from the hot spice set helps with a little educational puzzler which one must always do in science once a method is all worked out. I often request experimental subjects at the breakfast table to hazard a decomposition into elements of the topping of the proffered edible disc (note that one must always thank scientific subjects, inform them of possible harm and benefit and get their consent – I have good luck with this sauce but consent is often denied for my eggplant curry and you will not see that recipe here). My kids can usually tell where a little zip in the otherwise sweet flavored sauce is coming from. But pardon me for getting straight into results without quite finishing the methods. Lets return to equation [2] and evaluate further the set of elements in the Sweet Spices.

Cardamom features in many Indian desserts, Fennel seeds are usually in the sweet aperitif offered as you walk out of most Indian restaurants and there may be some disagreement about whether Cinnamon constitutes a sweet spice but in the US you do see it in sweet things like Cinnamon Buns (there is always room for debate and disagreement in science). Most scientists would hold the sweetness of brown sugar and Jaggery as self-evident (they don’t mind borrowing the good words like self-evident from the US constitution). The author acknowledges the possibility of the set not meeting the ideal of being mutually exclusive and collectively exhaustive and the user may consider other elements in either of the two sets (scientists always acknowledge limitations). The Cardamom comes in pods and you have to remove the skin to get the small black seeds inside, Fennel looks very much like Cumin (and I would advice that you check the label of your packaging carefully if you are adding both) and Cinnamon comes as twig like hollow brown barks. You can retain the skin of the cardamom pods and put them in hot tea to give it a nice flavor. Once again I refer the reader to Figure 1. Now, I have done equations, mathematical sets and Figures and if you are not yet convinced on scientific merit then here is something which will blow your brains out. Calculus!

What follows in [3] below is the seminal expression (scientists use the word seminal for very important breakthroughs) showing an integration using a dry grinder of the elements of the sets described above. The elements have been represented with their first letter except for Brown Sugar, whose acronym BS, in the authors perception, could lead to certain unfortunate mis-characterizations of the material presented here. The coefficients betas are quantities in measuring units (teaspoons for example) which the user can determine in a step-wise manner (notice that the Betas have subscripts – good linear additive models should use these subscripts to tie the quantities with the elements). The function FG(.) stands for Fresh Ground (Note the incredible adherence to proper form with the period in brackets for the argument of the function).

Here the integration is over time – as you can see from the integration limits you need about 2 or 3 minutes in a dry grinder till the integration is smooth without any left or right discontinuities (Scientists can be a little middle brained and often consider middle discontinuities in functions, unlike mathematicians). The delta denotes small quantities of the HS -hot spices (Good mathematicians always use the notation delta to denote something small and sometimes the author tries to pass off as one even though he is only a statistician). I usually start with equal test amounts of the four sweet spices and add in deltas of the hot spices. Then grind till it is a smooth powder. You can do the same and mix a small amount to your favorite maple syrup to form a colloidal suspension and taste. Figure out which component is excessive and which is less . Now, I must tell you about a double integral. I will not provide the expression as the editor has asked me to put it in supplementary materials (I feel a little bad about it as I was hoping it would at least make the appendix). The second integration allows adjustment of coefficients in the first integral. If one desires less of component X and more of component Y then one can do a second FG (Fresh Ground) function applied using less X and more Y to get a second batch to be mixed in with the first batch. For example X might be cardamom and Y might be Cinnamon (Notice the use of symbolic abstraction through the use of X and Y – symbolic abstraction allows for the subsumption of many contexts which the scientist often leaves the reader to enumerate – but notice I am very kind, like many scientists, and give an illustrative mapping).

The said colloidal suspension is reconstituted based on the final powdered substrate (I used the word substrate as it sounds interesting. Most scientists should look up thier words before sending material to journals like JASA or JAMA). Pancakes are prepared. Other applications include application to french toast. There can be some disagreement about whether the butter goes on the pancake before or after the colloidal suspension but one must not pour the suspension before placing the pancake on the plate (scientists must tell the lay public where there is room for interpretation and where one draws the line). My daughter, when she was much younger, called it all a butterrary doodle, and ate it. Ate a lot of it. A well validated method and application.

1. Source of the spices: Any South Asian Grocery store will have the spices listed in the two sets. Often the quantities can be quite large and if you don’t use these very often, you can go to a regular grocery store and get them in smaller quantities (though more expensive)