Wanted to share two sauce recipes my kids love. The second for a pancake sauce which is of a scientific nature is at this page. Before you get your little one to drip and drool on the dish in this page you will be needing sesame seed oil, red wine vinegar, half a lime, green chilies (we will look at how to make them less hot), soy sauce, brown sugar, hot pepper flakes, ginger and garlic. See picture with ingredients at the bottom of this page. The sesame seed oil can be obtained from a Chinese or Indian grocery store. And you will be needing those dumplings …

Diddle, diddle dumplings in the pot

You can get a bag of frozen dumplings from a Chinese or Korean grocery store, and often nowadays, at  a regular grocery store. I do vegetarian dumplings but you can get dumplings with other fillings. I start by boiling water in a pot and scooping the dumplings after about a minute in the hot water. If they thaw too much they will disintegrate when frying in the sauce pan – a little disintegration adds a little pulp to the eventual sauce (we will use the oil that remains in the sauce pan for the sauce).

Diddle, diddle dumplings in the pan

In a medium size pan add enough sesame seed oil so it sloshes a little bit, as that will leave you a little bit more oil for your sauce. I am a little dangerous in matters like this and my pan usually sloshes quite a bit. Then I add minced ginger (about a one and a half inch piece) , minced garlic (about 4 or 5 cloves) and hotter pepper flakes depending on how much heat you can handle. I get the heat from the red chilly flakes and not the green chilies – you can preserve the flavor while removing all the heat from the green chilies by slitting into halves or quarters lengthwise and removing all seeds and chopping real small. Once I have all these in the pan I turn the heat to medium high and add a little salt and the dumplings when the oil heats up. You don’t want to add too much salt as the dumplings contain some and the soy sauce which we will later add also has some salt.

Diddle, diddle dumplings in a bowl

You can usually have about 16 dumplings in a medium sized pan without piling them on each other. Turn the dumplings over and fry till they brown to the desired level. Pull out 4 serving bowls and transfer 4 dumplings to each of the bowls. Pour about 3 or 4 tablespoons each of soy sauce and the red wine vinegar to the sauce pan. Then add a spoon of brown sugar and shake the pan gently to mix with the remaining oil.

Tilt the pan and spoon the sauce on the dumplings in the bowls. Add more soy sauce, red wine vinegar and squeeze half a lemon on the pan and wash off any remaining oil and the ginger, garlic etc in the pan. Spoon this as well on the dumplings. This is when you yell for John to get his brunch – on weekends and vacations it is ok if he comes down with one shoe on and one shoe off. 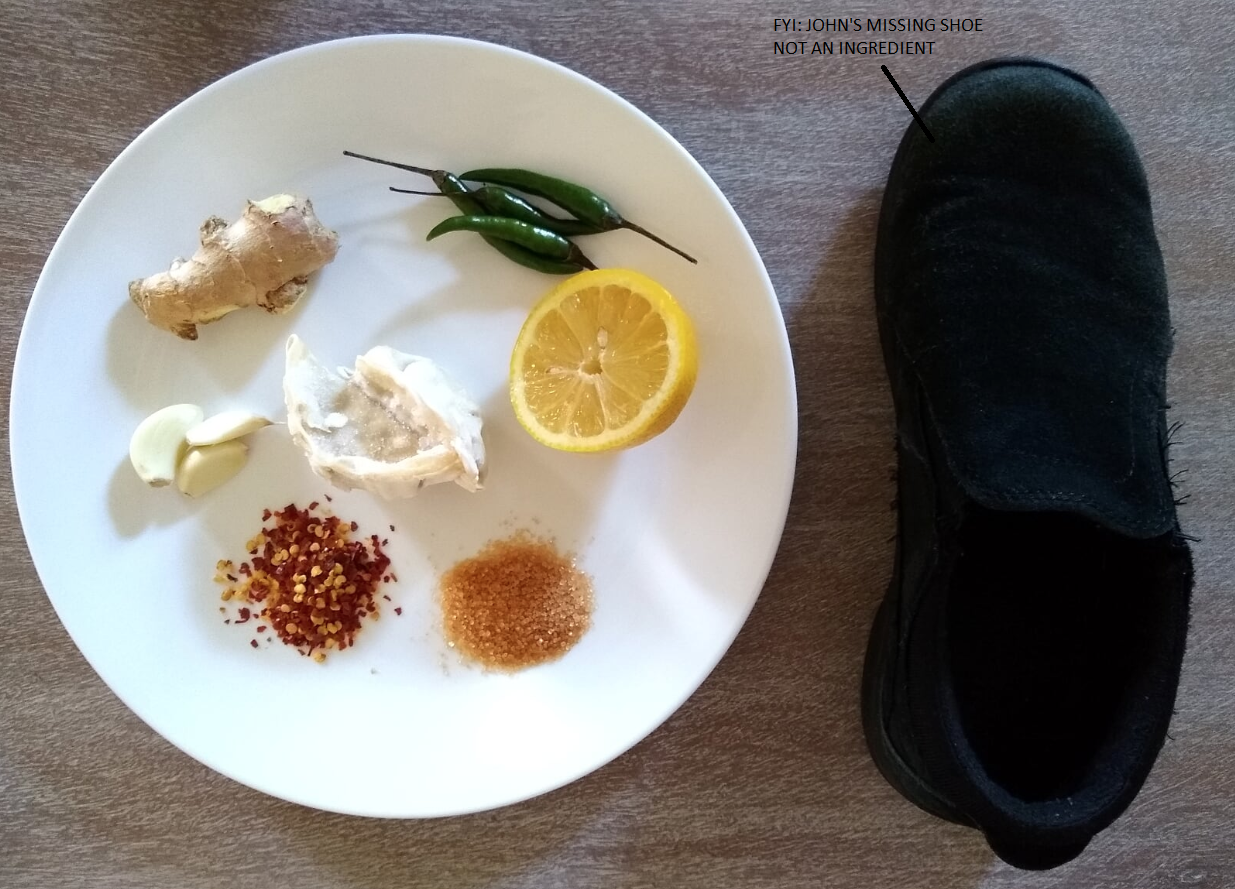 Ingredients on plate with the dumplings in the center.